I have to admit a private little obsession with Victoria Beckham. 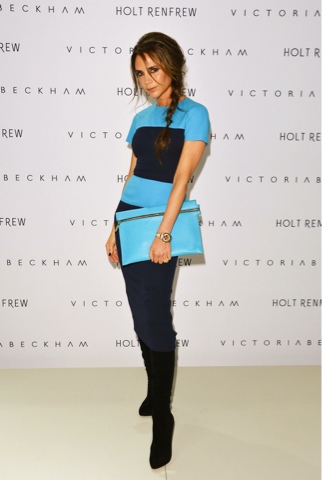 I first spotted her where we all did, on MTV with our jaws hanging open, trying to decide if we were being punk'd (if that show had existed then).

She was the moderately pretty, slightly bland in comparison, seemingly embarrassed one in back. She always appeared either less committed or less confident with her role as a singer. Eventually, of course, their camp and cheese and utter inoffensiveness won me over. They were catchy, dammit! In spite of a period of time where the whole Posh and Becks hysteria felt like the end of days, Posh even went on to make one of my favorite dance songs (and videos). Even then, though, you could always see her discomfort.


Fast forward to her career as a fashion designer, and I cant help but be amazed and happy for her success - legitimate fashion success, not celebrity fashion line success, mind you. I've spent the last few years feeling like a bit of a fraud - this appears to be a common ailment among educated women and a poll of my circle finds this to be surprisingly accurate. I find her apparent insecurities very charming and her success, confidence, and excitement for what should have been her passion from the start so very charming.

I think maybe we all kind of fall into a career. Regardless of whether we find success in it, that role may not be what will make us feel happy or fulfilled or even play to our strengths (hence the fraud feelings). Maybe we have to go through this to figure out where we should be or even to find some confidence. I'm currently attempting a career change and while it doesn't excite me the way fashion does, I'm hoping my self-defeating tendencies can finally be brushed aside.
Posted by Sally Bunny at 9:17 PM